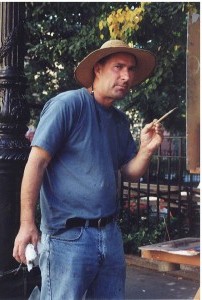 Born in Sydney’s eastern suburbs, Michael Braden began his working career as a signwriter in 1978, working in the tropics at Darwin and in far-north Queensland. After returning to Sydney to work as a pictorialist for Australia’s oldest  sign company (Althouse & Geiger est 1875) he was invited to join the ‘Signwriters Guild of Australia’. It was there that he met fellow guild member and ‘Alice Bale award’ winner Keith Dewell who encouraged him to participate in ‘life drawing’ classes at the renouned

‘Julian Ashton Art School‘ in Sydney where Keith is a highly esteemed tutor.

It was whilst painting a mural in the main street of Meekatharra, a small gold-mining town in the West Australian outback that he met eccentric landscape artist Tam Ambrose. Having planted the seed of inspiration, Ambrose emboldened Michael to pursue fine art with a more serious-eye and with particular emphasis placed on his plein air painting. Michael has since been encouraged and tutored by both Australia’s and world’s leading plein air painters.

A painting road trip around the U.S.A some years ago were key to a range of new experiences for Michael as a plein air painter that also drew him to the heart of the Californian plein air art scene where the ‘quirky’ and ‘lively’ urban street and sea-scapes of southern California that both charmed and inspired his imagination.

Michael is represented by Winkel Galleries, 317 Clovelly rd. Clovelly and Frances Keevil Gallery,  Sydney, N.S.W , his work is well represented in many private and corporate collections in Australia and Abroad.